Crossdresser, Bobrisky, has given an update on his “butt surgery”. 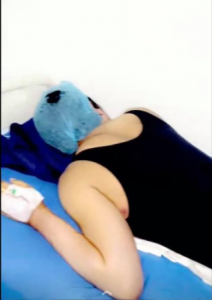 Recall that he had revealed that he would be travelling to Brazil for a butt lift surgery.

In a recently released video shared on his Snapchat account, he was spotted receiving Intravenous (IV) fluid drips while on a hospital bed.

He also disclosed that he is in pain.