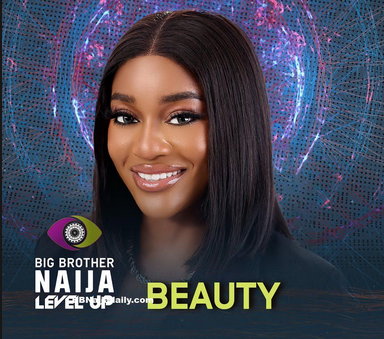 Beauty, one of the housemates in the ongoing Big Brother Naija reality show has escaped a strike from Big Brother.

Trouble started in the Level Up house after Beauty and Ilebaye who were former besties, clashed over a male housemate, Groovy.

Beauty got angry with Groovy her love interest for dancing with a female Level 1 housemate, Chomzy, at the Saturday night party.

Having confronted Groovy, she became and raised her voice at him. The 24-year-old former Miss Nigeria got angrier when Ilebaye tried to caution her against raising her voice and told her that she was behaving like a child

However, the issues went from bad to worse as Beauty and Ilebaye got into a heated clash that saw the former beauty queen removing the wig and cap of her former friend.

In a bid to control the situation, Big Brother summoned Beauty to the diary room where he cautioned her.

The rule of the reality show is against all forms of violence including provocation, goading, bullying, and victimization. Housemates who are found guilty of such offences are given a strike, however, three strikes lead to disqualification.

Derenle Reveals How Desperate People Are To Be Part Of BBN