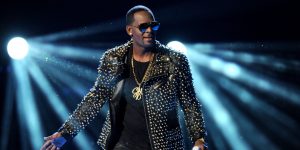 R. Kelly performs at the BET Awards at the Nokia Theatre on Sunday, June 30, 2013, in Los Angeles. (Photo by Frank Micelotta/Invision/AP)

HKN boss, Davido, has once again proved he is a force to reckon with in Africa.

In the past weeks, his single ‘If’ has been doing well and rubbing shoulders with some of the most popular hits recently released.

It went a notch higher when a version of the song recently remixed by legendary musician, R Kelly was unveiled by the original singer, Davido.

An elated Davido took to social media to announce the remix by R Kelly and since then his fans have not stopped talking about it.

Malaika Gets Love From Fans