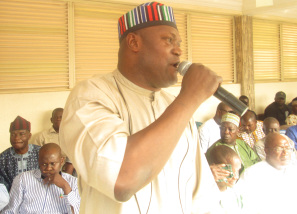 Okpokwu Local Government Area of Benue State is in the news again for another negative trend as gladiators from the area are at daggers drawn in a cold war.

Few days ago, the Caretaker Chairman of the LGC, Prince George Adah narrowly escaped death as hired assassins almost sniffed life out of him at the APC secretariat in Makurdi.

Hon. Adah had visited the state capital to report progress to the Acting Governor, Engr. Benson Abounu on the communal clash that erupted in the council area which left 5 persons dead.

On reaching Makurdi, Mr. Adah could not see the Acting Governor who was said to be busy at the time. He was however advised to report to the deputy Speaker, Hon. James Okefe who incidentally hails from the same Okpokwu LGA.

When it became dawn on the Caretaker Chairman that the deputy Speaker was not ready to see him, he elected to returning to the crisis ridden local government area as the Chief Security Officer. On his way back home in company of his aide and the APC LG Chairman, he got a call from a Senior Aide to the Governor at about 10pm, to return to Makurdi that the deputy Speaker was ready to see him.

“On reaching the Kanshio area at the outskirt of town, I got a call from Hon. Godwin Idoko, Special Adviser to the Governor on Health Matters, that the deputy Speaker was ready to see me.

“We made U-turn to Makurdi town and when we got there, Hon. Idoko asked us to sit with him at the joint within the party secretariat and discuss over a bottle of beer before the arrival of the deputy Speaker.

“It was in that process that I saw two (2) fiercely looking men moving towards our direction and before I could know what was going on, one of them took the bottle filled with beer and hit my head while the other one rushed me.

“The gush of the blood oozed around my face as I struggled to get up and run for my life. As fate would have have it, it was like they heard a sound of siren coming towards our area and I could feel their hands off me.

“And then there was an usual strength that engulfed me and I started running, even though I didn’t know the direction I was running towards.

“I was running without my sandals, without my phones and car keys. I didn’t even know what would become of my party Chairman and those other 2 innocent guys.

“On a lonely road I saw a bike man who helped me to the police station where I narrated my ordeal. I was later taken to the hospital by the police.

“Thereafter the police took me to the residence of Hon. Idoko and when he refused to open gate, the Police threatened to declare war on him and when he eventually open the gate, he said my car was with a Personal Assistant to the deputy Speaker. How could someone who was not at the scene of the incident be in possession of my car? Hon. Idoko could not answer the questions from the police”.

Opinion leaders and activists of Okpokwu origin have continued to condemn the cold war between the Caretaker Chairman and the deputy Speaker, saying the local government area has more pressing security issues at its hands at the moment and could not afford to be torn apart.

Speaking with our Correspondent in Ugbokolo, a Lecturer with the State Polytechnic, Mr. Onoja Benard bemoaned the rate of crises that have greeted the local government in recent times and warned that any rancour among the political class could degenerate into another heap of violence.

A youth Activist from Edumoga, Comrade Joseph Ella, while reacting to the assassination attempt on the Chairman, described the act as barbaric and unwarranted.

“I am not a politician and not a member of any party, but the security of Okpokwu remains my utmost concern. The deputy Speaker tried it January this year and we thought he was joking, until he prevailed upon the Governor to remove the then caretaker Chairman, Barr. Chris Iduh. He should have neatly done it again this time instead of generating imbroglio in our land “, he said.

On his part, a Chieftain of the All Progressive Congress (APC) from Okpokwu who pleaded anonymity confirmed the unhealthy rivalry between the deputy Speaker and the council Boss.

“The crisis between the two leaders of Okpokwu may not be unconnected to leadership tussle and ‘settlement’ which was not coming from Prince Adah as expected.

“The same reason why the former council Chairman was removed. Politics of godfatherism and unholy patronages at the expense of the hapless Okpokwu people must be condemned.

“The Governor should also be told that a tree can not make a forest. The deputy Speaker should not be taken as more powerful than the people of Okpokwu. Above all, the security of lives and properties in Okpokwu should be the utmost concern of the government. That’s what our party stands for “, he added.

All attempt to reach the Special Adviser to the Governor on Health Matters, Hon. Godwin Idoko proved abortive as he was not picking nor returning his calls.

Meanwhile, the deputy Speaker, Hon. James Okefe denied having any squabbles with the Council Chairman. In a telephone chat with our Correspondent, Okefe said all questions regarding the issue should rather be directed at the Chairman not him.

When asked if he knew that the council Chairman was attacked when he came to see him in Makurdi; the deputy Speaker said he was busy and could not talk further on the matter.

Recall that Hon. James Okefe has also had a running battle with the immediate past chairman of the local government, Barr. Chris Iduh who was abruptly removed by the Governor, January 2016 on the recommendation of the deputy Speaker. When he was ingloriously sacked, Barr. Chris Iduh was been rated as the best performing Chairman among the 23 council