The newly appointed Chief of Army Staff (COAS), Major General Farouk Yahaya, has been congratulated by the All Progressives Congress (APC).

The APC welcomed the appointment of Major General Yahaya as the new Chief of Army Staff (COAS) on Thursday, May 27. 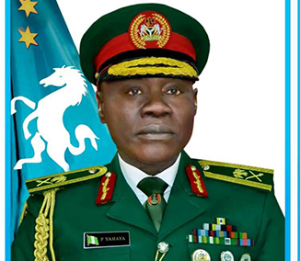 APC urged the new army boss to consolidate on the successes recorded by the military in tackling all security threats in the country.

According to Akpanduoehehe, this could be achieved and deepened sustainably through increased collaboration among the security services and communities.

The APC caretaker secretary called on Yahaya to be more vigilant and increase cooperation and support through sharing information. He added that it can pave way for faster mopping up the remnants of the insurgents and ending banditry and kidnapping in parts of the country.

While congratulating the new army chief, APC wished him success in his important and strategic national assignment.

APC also said it was satisfied that President Buhari-led’s administration has prioritised the provision of more and advanced equipment for the armed forces.

Earlier, President Buhari appointed Yahaya as the new army head. This was disclosed in a brief statement released by the Defence Headquarters.