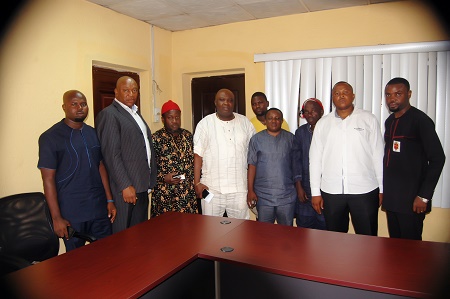 The Chairman of Etoks Communications, Deacon Iyke Kanu has lauded Lagos State governor Mr. Akinwumi Ambode for his leadership styles, giant strides in developing infrastructures around the state and quick response to emergency without ambiguity.
Kanu made the call during a courtesy visit on the governor in Alausa Thursday where he sued for peaceful co-existence between the Igbos and their host community.  Describing the governor as a man of peace, he urged Ambode to use his good office to protection the lives and properties of Igbos resident in the state.
In his speech, he asserted that, “His Excellency Governor Akinwunmi Ambode is a detribalized man of peace and a special breed of politician who in a short while so far in office has continued to make good his campaign promises of developing every part of the state.  He further described the governor as a security conscious leader whose timely intervention forestalled a seeming tribal fight that would have snowballed into an unmanageable situation in Mile 12 part of the state not too long ago.
“May I also seize this privilege to seek for more robust relationship and tolerance between the Igbos and Yorubas and equally beg for fair playing ground for all”, he concluded.
Responding, Akinpelumi Ambode, who represented the governor heartily, appreciated the Igbos for their massive support during the governorship election and assured of peaceful coexistence between the two tribes and protection of their businesses in the State.  The governor also promised security of lives and properties and equal opportunity for every residence of the state and further thanked Kanu and his team for the noble visit.
Kanu who led the executives of Akowonjo Igbo Traders Association on the visit further encouraged his Igbo brothers to remain law-abiding, support and corporate with the state government under the leadership of Mr. Akinwunmi Ambode at all times.
Other members of the delegation that joined their Patron include Engr. Ekanem Real, Patron; Mazi Udoson Ogbara, Coordinator; Mr. Goodman Ifeanyi, President, Mr. Keven Ogbonna, Secretary; and Chief S. U. Iwuala, Legal Adviser.
Post Views: 570