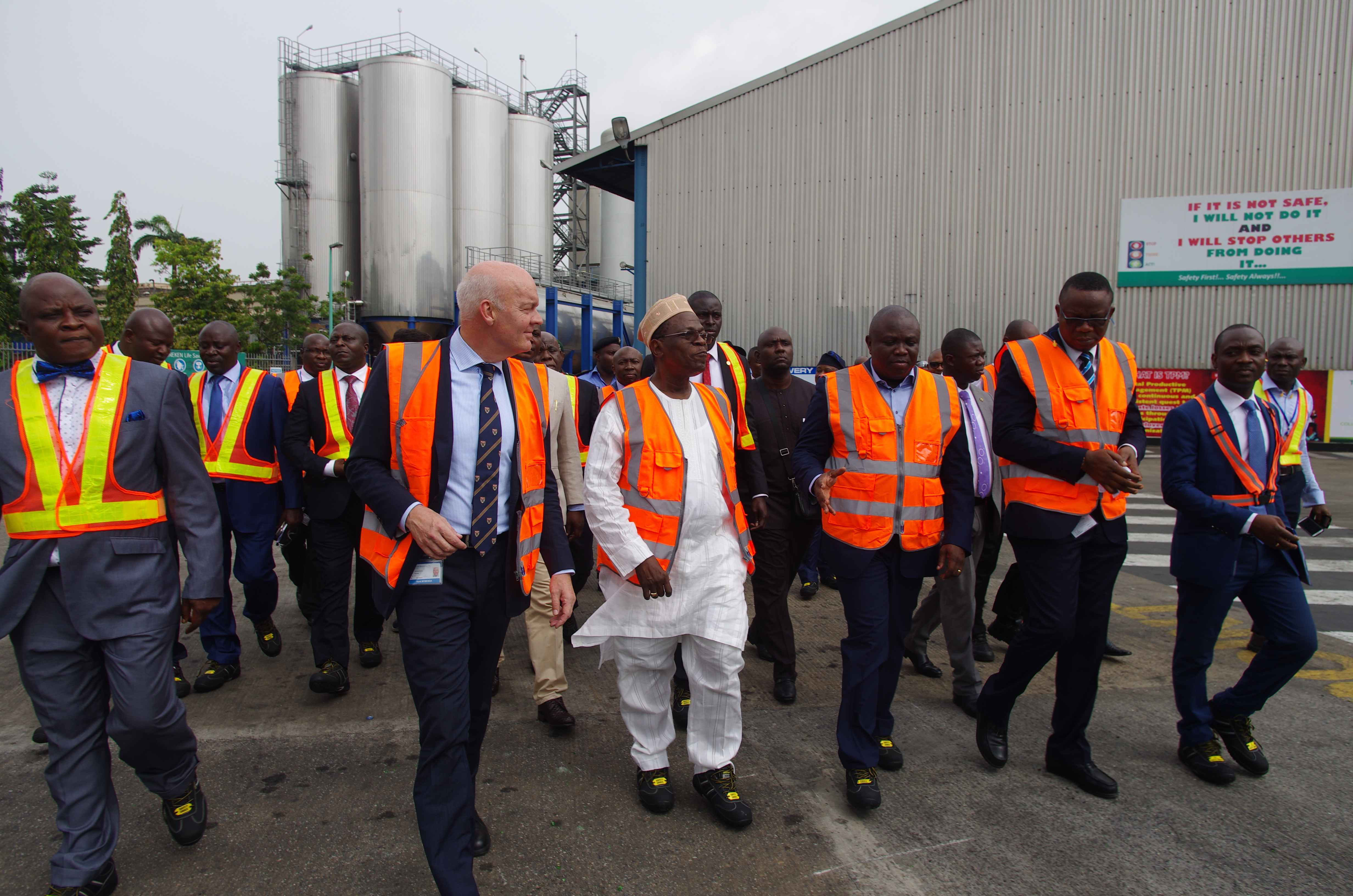 The Lagos State Governor, Mr. Akinwunmi Ambode has commended Nigerian Breweries Plc. for its commitment to the economic prosperity of the state and the nation.

Ambode, who was on a courtesy visit to the company on Tuesday, charged the management to remain focused on excellent business practices and outstanding corporate governance.  He congratulated the company on its 70thanniversary and emphasized that the company has been part of the development of Lagos since the creation of the state fifty years ago. “In the last fifty years, you have contributed to the growth and development of Lagos State. We are happy you have been part of the success story of this state”, he said.

Governor Ambode highlighted the company’s contribution towards job creation through direct and indirect employment of Lagosians. He also praised the Company for being a responsible corporate citizen, adding that it has done more than any other company in terms of corporate social responsibility in the state.

The governor pledged continuous co-operation and partnership between the state and Nigerian Breweries Plc. “We are part of this partnership and we shall do all to support it”, he said, while assuring of his government’s support in creating an enabling environment for the company.

In his welcome address, the Chairman of Nigerian Breweries Plc., Chief Kola Jamodu said that Lagos State occupies a special place in the heart of the company’s commitment to “Winning with Nigeria.” This commitment, he maintained, has driven its Corporate Social Responsibility footprints over the years to make several outstanding contributions towards human and infrastructural development in the state, especially in the areas of education, health and security.

The chairman assured that the company would continue to join hands with the governor in the march to make Lagos the cynosure of all eyes.

During the visit, the Technical Director, Nigerian Breweries Plc., Mr. Henk Wymenga highlighted the company’s socio-economic impact in Lagos State to include job creation, prompt and full compliance in payment of taxes which run into several billions of Naira, local sourcing of raw materials including the company’s sorghum and cassava value chain as well as its long term sustainability agenda, “Brewing a Better World.”

A major highlight of the visit was the signing of a Memorandum of Understanding (MoU) between the Lagos State Government and Nigerian Breweries Plc. on the ‘One Lagos Fiesta’. Governor Ambode signed on behalf of the state while Chief Jamodu signed on behalf of Nigerian Breweries Plc. The company also donated two security patrol vans to the Lagos State Security Trust Fund during the visit while Governor Ambode planted a commemorative tree in the premises of the company’s Lagos brewery.

The governor and his entourage were received by the Chairman of Nigerian Breweries, Chief Kola Jamodu, CFR, members of the Executive Committee and other management staff of the company.

FUNAAB Vice Chancellor arrested, to be arraigned for alleged misappropriation of funds

Ambode, Wife, Others Set For The 5th Nigeria Impact Awards