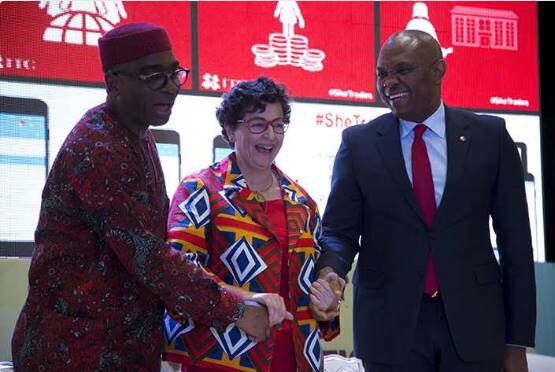 Themed ‘Achieving Zero Oil Growth Through Women Inclusiveness in Global Export Trade’ this year’s event, organised by the NEPC and the ITC, sought to increase the economic empowerment of women through trade via the ITC’s SheTrades Initiative. The goal of this initiative is to connect one million women to the international market by 2020.

Keynote addresses at the Forum were delivered by the First Lady, Mrs. Aisha Buhari and Ms. Arancha Gonzalez. In her opening remarks, Mrs. Buhari boldy called on the public sector to support women saying, “I would like to lead a call to the Federal Government to assign 20% of public procurement to women-owned businesses.”

Mr. Elumelu, Chairman of Heirs Holdings, United Bank for Africa and Transcorp Plc stated that the capacity of women in the private sector to contribute to the development of the country is underestimated, pointing to the significant value created by female beneficiaries of the $100 million Tony Elumelu Foundation Entrepreneurship Programme (TEEP).

“Africa is in need of economic and social development and investing in women is one of the smartest ways to go about it. It is for this reason that the SDGs have focused on women empowerment as a necessary commitment in alleviating poverty,” said Mr. Elumelu as he addressed the audience made up primarily of women from diverse backgrounds.

“When a woman does well, her entire family does well.  We need to put women first. I am proud to say that full and equal participation of women is an important internal objective of the Tony Elumelu Entrepreneurship Programme.”

Representing the private sector, Elumelu was joined by Mrs. Buhari and Mrs. Osibanjo, where he signed a Call-To-Action through partnership with The Tony Elumelu Foundation and Africa’s global bank, UBA, to achieve the following:

About The Tony Elumelu Foundation

Established in 2010, The Tony Elumelu Foundation (TEF) is the leading philanthropic organisation in Africa with the aim of promoting entrepreneurship as the catalyst for the socio-economic development of the continent. The Foundation has set itself apart from grant-making bodies, by operationalising integrated programmes to support entrepreneurship in Africa and by enhancing the competitiveness of the African private sector. www.tonyelumelufoundation.org  @tonyelumeluFDN

Fitch Affirms GTBank’s rating at B+ with Stable Outlook