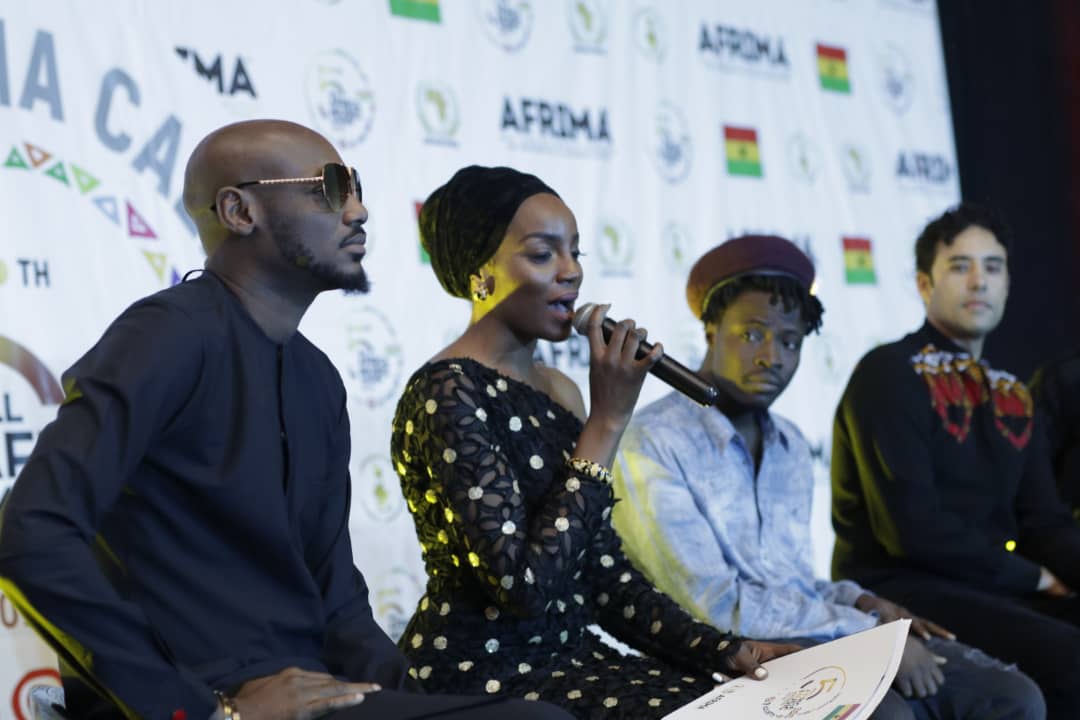 …as AU commends Africa’s Creative Industry for enthusiastic participation
The 5th edition of All Africa Music Awards, AFRIMA, in partnership with the African Union Commission, AUC, has received 8,009 songs/videos on its online portal as entry submission closed at 1159hour (WAT) of August 1,
2018. This year’s submission sets a record as the highest number of entries from African artistes, music producers, songwriters, Disc Jockeys (DJs), video directors among others, since the inception of the most prestigious music event in Africa.
The progress and increase of 63% against the 2017 edition of 4,816 entries is a positive marker that has elicited satisfaction from the African Union, the International Committee of AFRIMA as well as the Jury members
of AFRIMA.
Out of the entries received this year, Eastern Africa tops with 45% followed by Western Africa with 34%.  Southern, Central and Northern Africa had 13%, 6% and 2% respectively.
Reacting to the development, the Acting Director of Social Affairs, African Union Commission, Mr. Machacha Shepande, congratulated Africa’s creative industry sector for participating in the 5th All Africa Music Awards Entry Submission campaign opened on May 25, 2018.
“The AU commends the creative sector of Africa for participating so well in the AFRIMA entry submission process which closed on 1st August 2018 and in ensuring that the music industry remains relevant for the sustainable
growth of Africa’s economy which the African Union (AU) is championing through the cultural and creative agenda.
The receipt in the All Africa Music Awards platform, this year, of over 8,000 of entries across the five (5) regions of Africa shows clearly the growth and importance of this continent wide platform in the promotion and
development of the cultural and creative industries on the continent more specifically the creative industry of music. The significant rise in the entries has also shown that African talents spread across the continent
are awakening to the call to promote our cultural and creative industry continentally as well as to the world at large. The continent’s creative industry can only grow when we give relevant support to our creative
talent and craft.
Thus, the AUC calls upon AU Member States, and other stakeholders in the music industry to continue supporting its efforts in the development and promotion of the creative economy sector through the All Africa Music
Awards (AFRIMA) platform and other Pan-African cultural initiatives”, Mr.
Shepande concluded
Similarly, a member of the International Jury of AFRIMA representing Central Africa, Mr. Bob Ekukole, expressed a poetic insight while lauding the effort of the African music industry in entering their works for the annual AFRIMA entry submission process; “The muse of music seems to happily hover over the hills and valleys of our beautiful continent with
AFRIMA as the fulcrum. With 8,009 entries, it is a resounding believe in AFRIMA’s vision, dream, growth and acceptability by the African artistes
worldwide to communicate Africa to the rest of the world via art, culture, music, tourism and entertainment.
The renowned media and music professional who is the Director, TV Programmes and Production, Cameroon Radio and Television, CRTV, added that AFRIMA’s persistence in believing in African talents and their aspirations
is yielding a tremendous platform for excellence in music, a source of inspiration for the African continent’.
The 5th AFRIMA entries submission ended following a window period of May 25 – August 1, 2018 and a validity period that works must be produced and released within the year under review i.e August 1, 2017 to August 1, 2018. The entries will be screened by the 13-man jury of AFRIMA whose members are drawn from the five regions of Africa (two each from the
Northern Africa, Southern African, Eastern Africa, Western Africa and Central Africa) and
one African each represents the Diaspora – Europe and America and a representative of the African Union in the person of Mrs. Angela Martins who also is the Head of Culture of the African Union Commission.
The Jury’s task will be a week-long adjudication process from August 7 to 15, 2018 which includes: Screening, Categorising, Grading, Selection and announcement of nominations into the thirty-eight (38) Regional and
Continental categories of the award that will emerge winners of the AFRIMA 23.9 carat gold plated trophy.
In partnership with the African Union, AFRIMA is set to uphold the strong presence of African cultural heritage in the international scene, through its musical creativity and talents, while also stimulating conversations among Africans and between Africa and the rest of the globe about the great potentials and values of the African musical and artistic heritage
for the purpose of creating jobs, reducing poverty, calling the attention of world leaders to Africa and promoting the positive image of Africa to the world for global competitiveness.
The main events which include AFRIMA Music Village, Africa Music Business Summit and the 5th AFRIMA Awards will hold in November 2018. These events will be broadcast live to over 84 countries around the world.
Post Views: 617