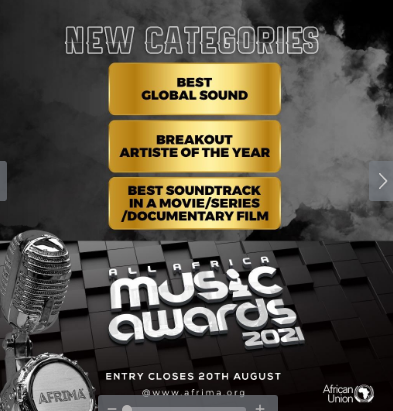 The International Jury of All Africa Music Awards, AFRIMA, has announced three new categories for 2021 edition – including Best Soundtrack in a movie/series/documentary film, Best Global Sound, and Breakout Artiste of the Year (Renaming Most Promising Artist).

In the meeting held virtually for approval and announcement between the International Committee of AFRIMA and The AFRIMA International Jury in March 2, 2021, the Jury noted that the new categories were selected to capture all aspects of music including its utilization in the movie industry and in recognition of the waves being made by African artists in the world. The addition of these 3 categories brings the total to 40 Award categories.

Announcing the new categories, Member, AFRIMA International Jury, Hadja Kobele, stated, “the scope of music industry is becoming increasingly broad, with multiple expressions of music and complex production techniques becoming more popular, and it is AFRIMA’s mandate to support the music industry in Africa, thus, the need to recognize and reward some of these talented productions.

“The category for “Best Soundtrack in a movie/series/Documentary” is awarded to the best substantial body of music in the form of dramatic underscoring written specifically for the film by the submitting composer. Some pre-existing music is allowed, though, but a contending film must include a minimum of original music.

The notice of the new award categories follows the commencement of submission of entries which closes on August 20, 2021 at www.afrima.org, where Artistes, Disc Jockeys, music producers, songwriters, dancers/choreographer, and video directors submit their works which must be produced or released in the year in review from June 1, 2020 to August 20,2021 for a chance to be nominated.

All Africa Music Awards, AFRIMA, in partnership with the African Union Commission, AUC, is the pinnacle of African music awards globally.

What I Left To Be A Disc Jockey-DJ Big N