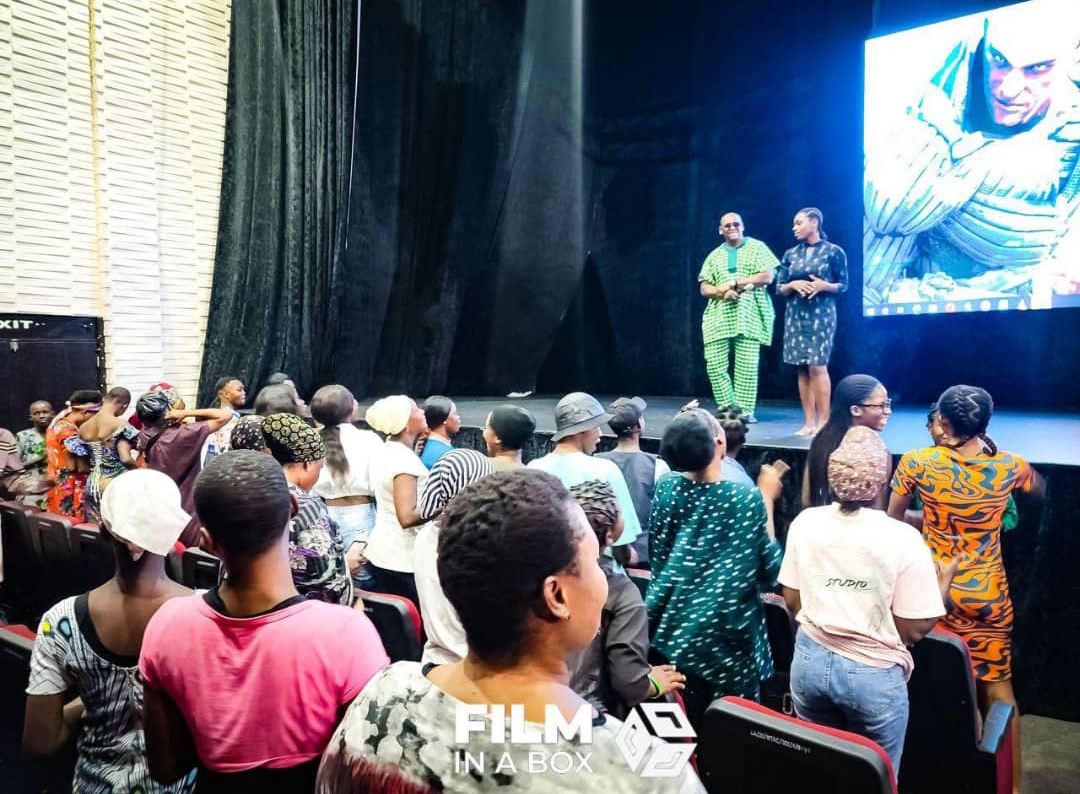 The excited faces and applause at the Lagos Theatre, Epe, Lagos could pass for the performance of A-list acts on the big screen.

However, the noise were those of family members, friends, parents and classmates of the Epe class of the film project of students of Africa Film Academy (AFA) – Film in a box -premiering their 10 minutes short film; Long Walk To Forever. 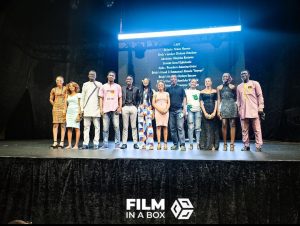 The initiative by Peace Anyiam Osigwe in conjunction with the Lagos state government in building capacity in the entertainment industry in three local governments of Alimosho, Badagry and Epe is yielding positive results.

According to Enwai, the coordinator of the Epe project, the students had a four-week theory before embarking on the practical aspect of the project.

She said:  “The purpose of the premiere is towards actualizing their project for Africa Film Academy (AFA). We came in and had a workshop with the students in different departments like acting, directing, scriptwriting, cinematography.

“AFA  in conjunction with Lagos State put together a workshop for the indigenes of Epe, creative, people  who are interested in joining the entertainment industry. We had facilitators coming to take the students on acting, directing, scriptwriting, cinematography and then CDGN craft like costume design, makeup, production design, and set design.

“Unfortunately here in Epe, we have more of the makeup creatives. They finished with their workshop and the students out together a short film to showcase what they have learnt. We are hoping this would help the students move on from here into something bigger.  Lagos state has been good with grants and the rest. We are hoping they get some money and continue from where they have started but basically what happens is that after the workshop , they are broken into companies and each company is going to continue from where they stopped. They put together stuff and hopefully, they would be empowered. We wish for the best for them. We have a mentoring session that hasn’t ended should they have any question, project or anything that they need help with.”

For Habeeb Seidu, Head, Strategy and Training, it was an amazing experience  having 220 students participate in Epe alone which cuts across other areas like sound, editing and same for the film director, Olaoluwa Owoduni, indigene a graduate of Business Administration who described his experience as joyful. He plans to make good use of the knowledge he has gathered to climb to the next level.

The Producer, Toba Obafemi informed that the major cast were 14 but all the 25 students of the class including crew members were given roles.

Peter Chukwuemeka DG, the Executive producer who in his personal capacity has produced a flick is also grateful for the Lagos state for the opportunity and vowed to continue in production, directing and acting.

Though she agreed that her role was challenging and even got to a point of frustration, the lead actress, Nimot Hassan, weathered the storm and currently preparing for greater challenges in acting.

From this smile, one can observe that loverboy lead actor, Olayinka Rotinwa gave a good account of himself on screen.
Assistant director, Oluwaseyi Jimoh said that that it was not his first time in directing but he is happy to be part of the project.

Dickson Omolara Florence, who played the role of the bride’s mother debunked her role as not her actual person off screen as she said that she is a gentle and kind woman.

Adding his voice to the many thanks showered on the Lagos state government as well as giving an overview of the project, Dean of the faculty, veteran actor, Keppy Ekpeyong –Bassey said: “What we do is to recruit interested participants in about Nine (9) departments of filmmaking. We have the mandate to capacity build the three local government areas; Alimosho, Badagry and Epe. And we have been doing this six (6) months at a stretch,  we have done it for some time, we have recruited some of the best brains as facilitators in the industry and the good part of it is that they are not just from the academia, we are having working practitioners also sharing experiences. We bring in people like Jide kosoko, probably Saidi Balogun, to share their experiences and encourage the participants at all levels.

“Today, the students in Epe have produced their first short film. They put a premiere together and that is what they are screening. They are now more motivated now than ever because they have seen themselves for the first time on the big screen. They are hearing the applause from their classmates, parents, friends who they invited and they are realising that they can do it. The important thing is not size of building capacity, it is the fact that it is translative and already they are producing films.

“And the next level after this first short film which is like a class project, it is like that in each of the local governments where we are building capacity. We break the students into four companies randomly, everybody is mixed up with all participants and they are challenged to produce films. So, we have repertoire of short films which they have produced and all the things that would be uploaded shortly and you would see what these people have done in a short time is unbelievable. What that means is not that they are the best at teaching, it is the fact that they are hungry. The participants are rather enthusiastic and they also demonstrate a lot of passion and they are translating it. We are really excited about the Lagos state government. This is about the only government that is investing heavily in entertainment. Averagely we have 250 students in each of our local government.

“In this present exercise, we have built capacity in over 750 people. During the exercise because of the long duration, we give them a meal a day and we found out that some of them are not really as healthy as they look, so there is a medical team that comes in and check their sugar levels, heart beats and subsequently advise them on what to do. The scope our curriculum goes beyond the focal areas, so we included project management, mental health issues, personal hygiene, branding – those key areas to give them a more rounded feel about real life and help them key into that and take off.

“For instance, we started from Alimosho and since then, they have been producing their own films and sending us what they have done. We broke them into companies so that we can keep supervising what they do. Lagos state has also volunteered to give them loans and grants, all they have to do is, come together of the companies which we have created for them and pitch, then they will consider their pitch and give them grants or loans. It doesn’t just stop now, it is a continuous exercise for them. This is a success story for me. I am waiting to see more. This vision of AFA is a Peace Anyaiam Osigwe initiative; the rest of us are just executing on her behalf.”