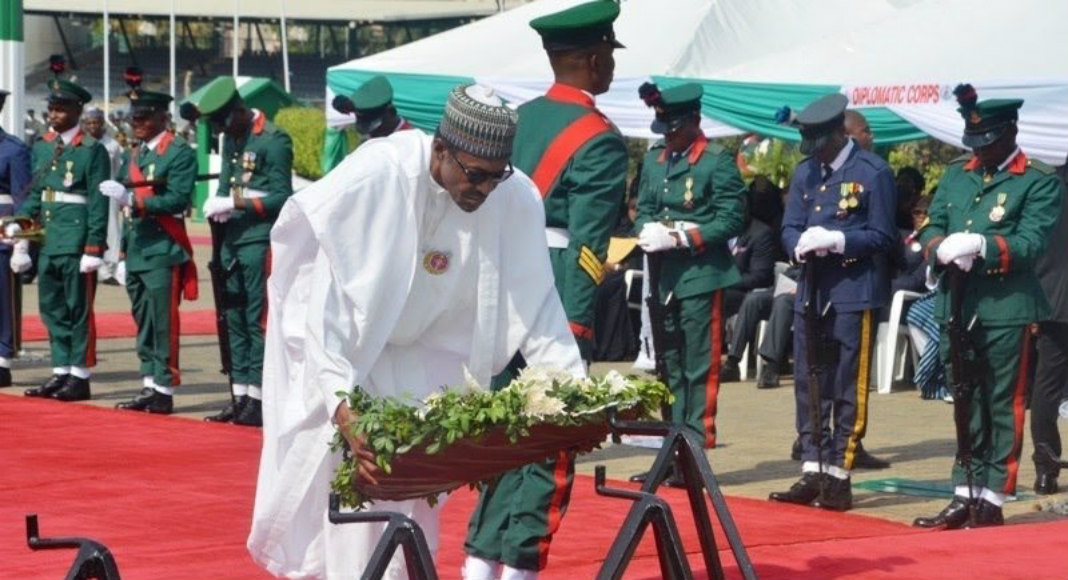 In a statement released by Adeshina, he said that the day provides an opportunity for the government to chronicle the landmark achievements by the military in tackling security challenges in the land.

According to the statement, Boko Haram is much weaker today than in 2015 and territories controlled by terrorists have now been regained.

See a list of the achievements listed by the presidency:

2. Troops also rescued a total of 864 kidnapped victims across the country.

4. Equally, 1,910 criminal elements were arrested and a large cache of arms, ammunition and equipment were recovered during the period.

1. 5,281 livestock, 6,951 rounds of ammunition and 120 assorted rifles were recovered from the armed bandits

3. 461 arrests were made in the zone including high profile armed bandits, gun runners and bandits’ collaborators

4. A total cash of N6,365,550 was recovered from armed bandits and their informants in the zone

2. A total of 1,385 rounds of ammunition, 45 grenades as well as 95 assorted rifles were recovered from terrorists

3. Several gun trucks were captured, while some others were destroyed during airstrikes

4. 1,805 insurgents/terrorists including commanders were killed by the troops aside scores killed by air raids/attacks

5. 79 arrests were made including high-value targets.

2. 513 rounds of ammunition and 1,055 rustled cattle were recovered from armed bandits and other criminal elements

3. 1,250 criminals including family members of the Darul Salam sect were arrested within the period

3. Additionally, troops impounded a cumulative total of 31,236.8 barrels of stolen crude oil as well as 12,272,652 litres of stolen PMS from oil thieves

2. Also, a total of 47 kidnapped victims were rescued, while 72 vandals and criminals were arrested

3. A total of 4,250 bags of 50kg foreign parboiled smuggled rice were impounded and 45 boats engaged in illegal activities were arrested

4. Troops also arrested a total of 53 pirates and 25 trucks as well as recovered 23 rifles, 65,330 rounds of ammunition and destroyed 23 sea pirate camps.

2. They also recovered a total of 3,594 rounds of ammunition and 14 assorted rifles

3. A total of 23 illegal refining sites were immobilized, while 15 boats and 23 trucks engaged in illegal activities were arrested

4. 35 kidnapped victims were rescued, while 48 arrests were made Grief as 12 people die in 24 hours and Nigeria’s COVID-19 cases soar

1. Revitalization of the Multi-National Joint Task Force comprising Nigeria and her neighbours

2. Relocation of the Military Command and Control Center to Maiduguri in June 2015

4. Several towns and villages have been reclaimed from Boko Haram

6. Several Boko Haram leaders have been killed or arrested, and the arrest of Khalid al-Barnawi of the Ansaru splinter cell brought an end to the terrorists’ tight grip on North Central Nigeria

7. Investing heavily in military hardware, including 23 new aircraft that have already been delivered and inducted into service, while another 18 manned aircraft and 8 Unmanned Combat Aerial Vehicles (UCAVs) are being awaited, in 2021/2022. This is in addition to attack boats, patrol vessels, armoured tanks and so on.

7. The Army established ‘Special Mobile Strike Teams’ in the Northeast, while the Air Force has established or is establishing new bases in various parts of the Northwest and North Central (Benue, Nasarawa, Taraba, Zamfara, Kaduna, Katsina). Significant developments that show progress in Borno state and Northeast.

1. El-Kanemi Warriors Football Club returned to their home base in Maiduguri in April 2016, two years after relocating to Katsina State because of the insurgency

4. Chairman of the Christian Association of Nigeria (CAN), Borno state chapter, declared the 2017 Easter Celebrations as the best and safest since 2009

6. Nigerian military reopened Maiduguri-Bama-Banki Road in March 2018, four years after it was seized by Boko Haram

7. Hundreds of thousands of displaced persons have returned to their homes and communities across the Northeast, since 2015

3 Jerry cans of Vegetable Oil, among other seized items.

4. The Air Force will conduct a total of six of these Exercises between January and June 2021, mostly in the Northwest, particularly in Zamfara and Katsina states.