The trail of former governor of Bayelsa State, Timipre Sylva will commence on May 25.

The court will be sitting before Justice E. S Chukwu of the Federal High Court Maitama, Abuja.

Sylva is facing trail on a six count charge of fraud to the tune of N2.45bn (two billion, and forty five million naira).

The Economic and Financial Crimes Commission, EFCC, on Monday, May 18, re-arraigned Sylva who allegedly converted N2bn (two billion naira) worth of properties and resources belonging to Bayelsa State between 2009 and 2010, during his tenure as governor of the State, an offence punishable by the Money Laundering Act.

He was also alleged to have induced Union Bank Plc to grant him an overdraft facility of N2bn on the pretext of using the money to augment workers’ salary.

It will be recalled that, the former governor also has similar charges pending against him before Justice Ahmed Mohammed of the Federal High Court, Abuja .

Sylva had earlier pleaded not guilty to the charge when he was first arraigned for the offences before Justice Adamu Bello (retd.) on June 5, 2012.

The matter had to start de novo (afresh) following the retirement of Justice Bello, a development which prompted Sylva’s re-arraignment before Justice Chukwu.

Upon his plea, Sylva’s counsel, Israel Olorundare, SAN, through an oral application sought bail for the former governor.

The prosecuting counsel, Festus Keyamo, represented by John Ainetor, did not oppose the bail application.

I have more great news for you from our Infectious Disease Hospital. Today, additional two female patients have recovered fully, having tested negative twice consecutively. They have been discharged from the facility.

With the newly discharged patients, we now have a total of 31 people that have fully recovered from #COVID19 in Lagos and discharged to join the community.

We are full of appreciation to the front line health workers, working hard during this difficult time. Their successful strides in this war against COVID19 brings us joy and hope. I therefore enjoin citizens to continue to listen and obey health advisories issued by our health experts as they coordinate resources to beat #COVID19.

I have no doubt whatsoever that we have the upper hand in this war. We are winning and we will eventually win. 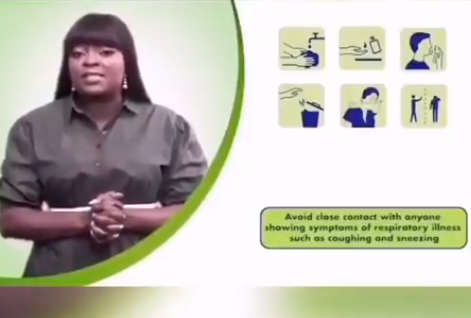 Since the actress’s arrest, the organization has opted to go with an older commercial preaching the health advantage of using the brand.

This follow criticisms that has trailed the actress following her violation of the lockdown of Lagos State, Ogun State and Abuja ordered by President Muhammadu Buhari.

Reacting to the arrest of it’s ambassador, Dettol Nigeria took to Twitter to state it’s position on the violation.

Also Read:  About Davido’s other talents

A statement read in part: “As a responsible organization, Dettol Nigeria does not condone any breach of the guidelines on Covid-19 and are concerned about the turn of events.” 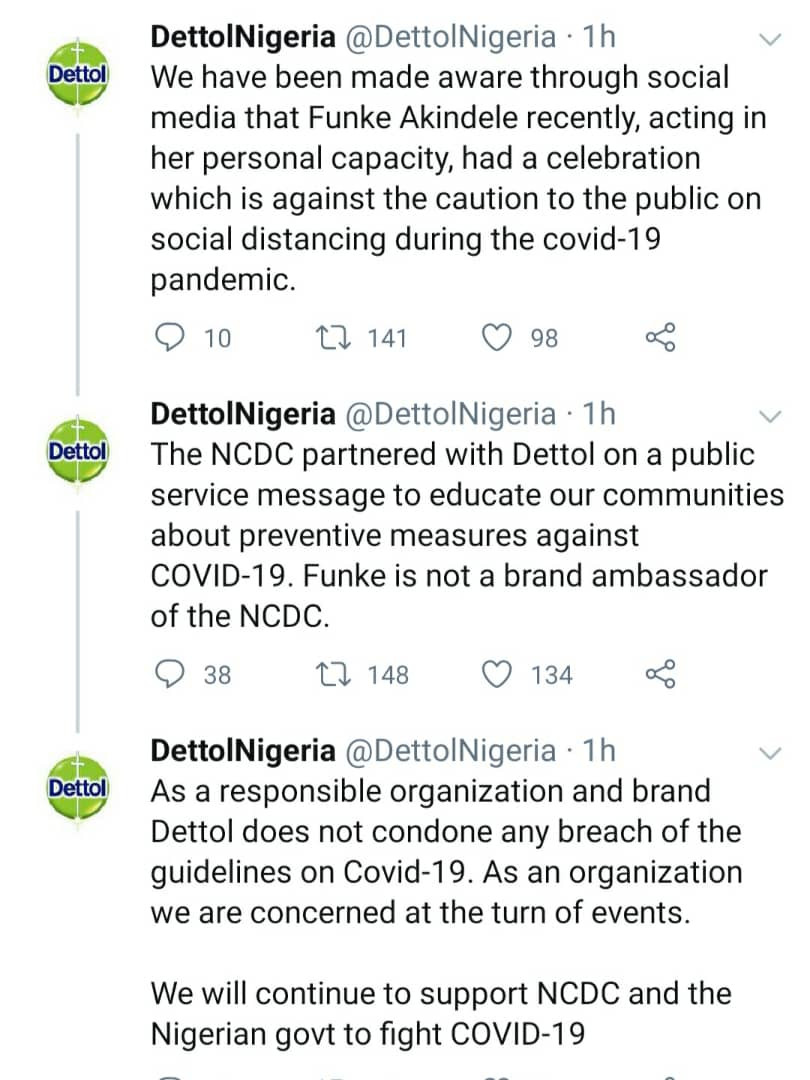 Recall that Akindele was arrested by the Lagos State Police Command for hosting a party to celebrate her husband’s birthday despite presidential order restricting movement and public gathering.

Confirming the arrest of the actress, Lagos State Public Relations Officer, Bala Elkana, stated that the actress had been taken to the State Criminal Investigation Department, Panti, Yaba.

“Yes, we have arrested Funke Akindele and we are looking for the others. She has been taken to SCID,” Elkana stated.

Lagos State Governor, Mr. Babajide Sanwo-Olu, on Saturday, introduced more palliative scheme for vulnerable residents who might be affected by the ongoing 14-day lockdown directive imposed by the Federal Government in the State.

For the duration of the lockdown, the State Government will be offsetting the medical bills of any patient admitted into the State-owned secondary and tertiary healthcare facilities, Gov. Sanwo-Olu announced in a briefing after the State’s Security Council meeting held at the State House in Marina.

The new palliative scheme, Sanwo-Olu said, will cover the medical equipment expenses of pregnant women on maternity delivery and other categories of patients in emergency, casualty cases, laboratory testing and surgeries.

Also, the Governor said the cost of any medication bought at the State-owned secondary and tertiary healthcare facilities will be borne by the Government during the period of lockdown.

The move, Sanwo-Olu said, is to ameliorate the difficulties that may be experienced by the those whose wellbeing may have been affected by the ongoing restrictions initiated to curtail the spread of the novel coronavirus pandemic in the State.

Lagos is worst hit of the three states currently locked down by the Federal Government. Others are Ogun State and Federal Capital Territory (FCT).

Sanwo-Olu said measures had been put in place to ensure the scheme was not compromised, adding that the palliative would make great impact on those in need of medical attention in the period of lockdown.

He said: “Lagos State Government will, for the duration of the restriction on movement, be taking full responsibility for the medical bills of all patients who fall in the following categories at all Lagos State-owned secondary healthcare facilities.

“The first category are patients in emergency, casualty cases, including registration, laboratory tests, surgeries, and drugs. Those in the second category are maternity cases. We will bear the full cost of pregnant women on normal delivery and Caesarean sections in our hospitals in this period of lockdown.

“What this new scheme means is that, at this time, patients with the listed medical conditions will not need to pay to access treatment and care in all our 27 General Hospitals across the State.”

The Governor said the State had started to review the process of distribution of food relief package, which was introduced at the beginning of the restriction, admitting that the programme had made positive difference in the lives of the intended beneficiaries.

He, however, pointed out that there was ongoing appraisal of the social intervention programme, which, he said, was necessitated by pockets of irregularities observed in its implementation.

Sanwo-Olu disclosed that the restrictive measures had started to pay off, stressing that lockdown had afforded the Nigeria Centre for Disease Control (NCDC) to keep up and make appropriate progress in tracing of contacts.

“The restrictions have started paying off; the Nigeria Center for Disease Control has told us that they have been able to take advantage of the absence of traffic on our roads to make appreciable progress in their contact tracing,” the Governor said.

He said all patients in the State’s isolation centres were doing well and recovering faster despite the surge in Covid-19 case in Lagos. A patient, Sanwo-Olu said, was discharged on Saturday afternoon, making it 24 COVID-19 patients treated and released by the State.

Sanwo-Olu reiterated his Government’s commitment to security of residents’ lives and property, warning hoodlums who may want to take advantage of the ongoing restriction of movement to rob. The Governor ordered 24-hour security surveillance across residential areas and asked the police to dislodge hoodlums in various spots across the State.

He also said more measures would be introduced to ensure the lockdown remains effective.

On whether there would be extension of the lockdown, Sanwo-Olu said: “We are in the period of national emergency and the ongoing restriction was declared by the President. If there’s need for an extension, the Federal authorities will decide that based on the outcome of the ongoing measures.”