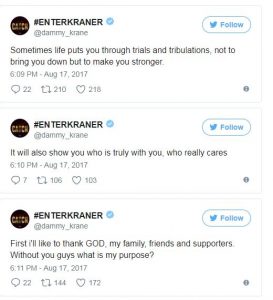 Singer, Dammy Krane, has been cleared of his grand theft case.

The singer was arrested and charged to court in June for grand theft auto and credit card fraud.

He was cleared of the charges on Thursday, August 18. According to the Miami-Dade County Criminal Justice Online System, he appeared for trial at 9:15am today at the Justice Building, Room 4-3 with Courtney Erik as his defense attorney and Migiel De La O as the judge and after the hearing. The case was been officially closed.

Expressing his happiness, the singer took to social media to say sometimes things happen to make you stronger.

The singer has hinted his fans about a song which will reveal all the real details of his experience. According to him, the song will be dropping soon.