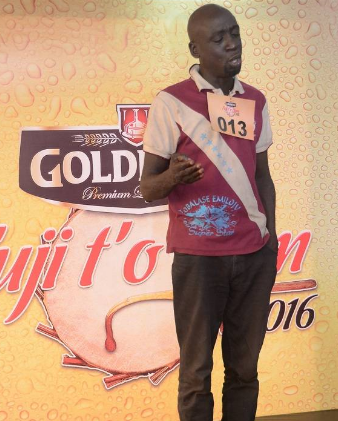 Participants in this year’s audition for the annual Fuji music talent hunt, Goldberg Fuji T’o Bam, were taken aback on Wednesday when a blind man, Ibraheem Kareem, was led into the Havannah Hotels, Egbeda, venue of the contest and expressed his intention to participate.
The whole thing initially appeared like a joke, but it later turned out a reality when Kareem disclosed that he came from Ilorin, Kwara State purposely to audition because he has talent in the Fuji genre of music.
Speaking about his participation, Kareem, whose stage name is Fuji Solution, said people should not look at his status as a blind man but base their assessment on his performance. He disclosed that he was not born blind, but blamed his plight on an unfortunate incident that robbed him of his sight.
According to him, he heard about the exercise in Ilorin over the Radio and was determined to participate. Kareem, who was led into the venue of the audition earlier than many other contestants, could not make the selection list as he bowed to the superior exhibition of skills in Fuji music by his counterparts.
Meanwhile, Kareem did not lose hope as he disclosed that he would use the experience gained in Egbeda audition to prepare for the audition that would hold in other cities closer to Ilorin.
Salam Wasiu Olanrewaju, an Agricultural Engineering graduate of Federal University of Technology, Akure, Ondo State was another contestant at Egbeda. Olanrewaju said before the result of the audition was announced, that he decided to go into Fuji music because he has talent in it. He said that decision was not borne out of inability to secure a gainful employment as an Agricultural Engineer. His words: “This is my talent; it has nothing to do with inability to secure a white collar job. I do what I love most. I wish I win so that I can actualize my dream of preaching one love. Music is a powerful instrument one can use for that.”
Addressing the contestants before audition, Alhaji Sikiru Ayinde Agboola (a.k.a SK Sensation), Chairman, National Project Committee of the Fuji Musicians Association of Nigeria, who is also Chairman, Panel of Judges; encouraged them to put in their best. He said the judges were looking for the best amongst them; thus every participant will be given equal opportunity.
Other members of the Panel are: Alhaji Isiaka Ayinde (a.k.a Fine Kabaka), a Fuji musician; and Mr. Adekunle Abolade, Radio/TV Presenter and Yoruba Film Actor.
Apart from the venue at Egbeda, audition was held at Maridom Palace Hotel, Sango-Otta. Egbeda is in Alimosho local government area of Lagos state, while Sango-Otta is in Ado-Odo/Ota Local Government Area of Ogun State.
At the end of the keenly contested auditions, a total of 40 outstanding potential Fuji talents grabbed the selection ticket at the two centres.
Speaking after the audition, Agboola described the audition as keenly contested by the budding Fuji artistes with exceptional talent. He applauded the Goldberg Fuji T’o Bam consumer engagement platform which “over past editions, has created credibility and fairness for all contestants, thus making it the first Fuji music talent hunt in the history of Fuji music in Nigeria.”
Agboola added that the show is a platform where the best talent emerges as winner at the end of the thorough and exciting session. His words: “We will ensure that we create a level playing field for all contestants where we look at their singing abilities and their dexterity in performing and managing stage space. So far, we have not been disappointed with the level of the contestants this year.”
Post Views: 492